I recently purchased a copy of Filmora to build and edit videos with. I see myself making more animated videos in the future. I don’t know why I hadn’t been using it before.

The tutorial has both the video screen captures from Clip Studio Paint so you can watch me draw and it on screen video capture from within Blender so that the process is more understandable. I am a little nervous when speaking publicly but this took it to a whole new level. Next time I’ll practice what I’m going to say more but the final project does sound pretty genuine which is what I was going for.

If you haven’t seen them yet, I wrote about the recent videos that I had put together and posted on YouTube here and also here. People have already taken notice of these short gems and I think I’m up to five subscribers already. Woo Hoo!

Hopefully you all find inspiration and maybe get some knowledge for this instructional video. Always love to get feedback so let me know what you think.

I finished my latest video upload for YouTube and have uploaded it today. It’s called the City Witch. You can see the earlier art post here.

The design was created using Clip Studio Paint and I used the Blender Video Compositor to add the music into the video into a combined video for your listening and viewing enjoyment.

Just uploaded my latest video to my channel. You can read more about it in my latest post earlier tonight. I included a screen shot down below so you can see it in the Blender video editor.

Just uploaded my next video on YouTube. It’s a combination of an illustration made using Clip Studio Paint and Blender. As an artist, it’s very important to utilize all of the tools out there…and boy are there a lot. Blender and Clip Studio Paint work very well together in that you can start a project in one application and finish it up in another. Most folks I know create grey boxes in Blender, export them, and then import them into their favorite drawing program where they create their final illustration.

This has been a work in progress for a while. I created the illustration last month. You can read more about that here. I have been trying to take my work to the next step by mastering lighting and special effects. I mentioned this in an earlier post too.

I took my polished illustration and exported it from Clip Studio Paint as a .png file and then uploaded into Blender. As you can see in the illustration below, I put my illustration inside of a volumetric cube. The bright orange outline show the plane that I uploaded my image onto. A feature in Blender called image to pane creates a billboard style look to your illustrations that you can then modify within Blender itself.

By putting my illustration inside of the cube, I was able to create a particle effect in front of the illustration to give it a 3D look with some subtle movement. It takes a little trial and error to get it done right. I used this video to figure out how to do all of the fine tuning.

Above you can see what the design looks like when you turn on the shaders. The yellow dots are the particles shaded with a bright yellow for contrast. A shader by the way is a term that displays the color or lighting effects within Blender that you chose so you can see how it looks while you create prior to processing the final rendered piece. I found that the program works faster with the shaders off and it’s not so distracting. It’s a lot like coloring in greyscale first prior to using real colors to make sure that the piece is balanced correctly.

Blender has a really cool video editor that I very much enjoyed using. After I was pleased with the results of the final MP4 video, I uploaded the audio file that I found from the YouTube audio library. YouTube has a lot of good choices to select from. I entered the search term for a “haunted forest” and found a track called Green Forest by Riot.

The trick during this part of the process was lining up the frames with the audio. The music file was much longer than my 100 frame video so I copied and pasted it over and over until I had enough cells to line up with the music. Every other cell I selected the reverse cell option so that it didn’t look jumpy or like it was starting over from the beginning. I almost got up and walked away twice because it seemed tedious but I am pleased with the final product.

Above is the final rendered image exported from Blender. I added two spot lights to the image for a magical contrast. There is the spot light coming from the top left. It’s a little hard to see in this picture. The bottom light by the rocks is placed down below with the bloom setting turned on. This makes the rocks seem a little more magical.

I hope you enjoyed the process overview for this piece. If you want to see the finished video, please click the link at the top to check it out.

Send a note to me if you like it or if you think I should do more. If I know people like them and are interested in this sort of thing, It will motivate me to make more. 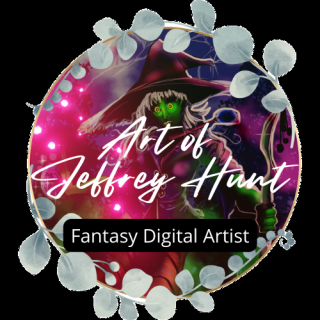